Heya ranebofam we've got a HUGE update for y'all! We've been working  on this update for awhile and we're exclited to reveal it!
This update includes several new year-round prompts, Some changes to existing prompts, seaonal prompts that cycle in and out, as well as a farewell to some old prompts!

Our prompt list has been condensed and reorganised a bit!

Mini events Prompts has been renamed to "Limited Time Prompts"
Eggster, Sunnyfest, Hattowen, and Chumbus folders have been condensed into one folder "Major Event Prompts"
A new catagory has been released "Casual Prompts". This catagory contains year round prompts that are just fun ideas for drawing your ranebopets!

The following prompts have recieved major or minor edits!

Style Chameleon
This prompt now requires only four fullbodies, as opposed to the previous Six!

Snacktime
Instead of a moodboard, you now have the option to do 3 thumbnails instead!

Sloppy Prompt
Sloppy has been updated with a bunch of new methods for creating messy art! Have a look over the updated prompt to see what you can do!

Best Baker -> All You Can Eat!
This prompt has been completely revised! The prompt has been moved to the casual prompts section and now focuses on food inspired drawings rather than recipes!

Not only new prompts, but new types! Every season we will be releasing three special prompts that only last for three months! These are small for-fun casual prompts to complete and you wont know what they are until the season arrives!

Theres also some new permanant prompts too! Here's a list, but be sure to explore the prompts tab to learn more about them.
Glow up
Jammin' Out
Happy Snaps
What's in your Bag
Off-Leash
Best Bud
Alt-u

Their time has unfortunately passed! With so many new prompts coming in, we decided it was time to say goodbye to some old prompts that either lost their function when we moved off Deviantart in 2020, or prompts that simply didn't see much use. There is a chance these prompts may return. but no garauntee.

All prompts that previously said TC should now say RC! We have gone through all prompts, but please do inform us if you happen to find a prompt still stating TC as the currency reward.

Additionally, all challenge prompts and casual prompts now give a small RC bonus to incentivise doing prompts! These bonuses may be adjusted in the future for balance!

We've got a small update for yall!!

We've also updated the guides masterpage so its a bit easier to digest! Some old guides have also been removed https://www.ranebopets.com/info/guides

ADDITIONALLY
From now on when submitting any claim, you are required to add your RC to the rewards section. We've been leniant on this in the past, but its becoming far too frequent that users are forgetting to add this or choosing not to! If a submission does not have the RC in the rewards section it will be rejected.

Welcome to Halcidays! What started as a holiday for cappari to celebrate Halcyon became a ranebo-wide event to celebrate love in all its forms. Here’s what you can do during this month….

We've introduced TWO new babies to the hatchling lineup, Sugarkits and Bukki! These are Sugarnix and Bakiri babies. They are cash-shop exclusives and will be available till the 5th march! They will also be available as offspring for the wishcaves event and these are their bases.

Heya everyone! The hiatus is now over and the queues will be reopened shortly!

We know some of y'all may've gotten a lot of art done over the past three weeks, so to prevent the queue from getting immediately overrun with submissions, we ask that for the next week please limit yourself to submitting only three submissions to any queue per day. This is for all queues, meaning you can submit 1 myo and 2 prompts, but not 2 myos and 2 prompts (As that would be 4 total)!

Please be respectful of this rule for the week and welcome back ranebofam!

Some people were asking, and yes the 3 submission daily limit has been lifted, as its been a week! Though the rule is gone, please do be courteous and try not to spam the queues regardless! 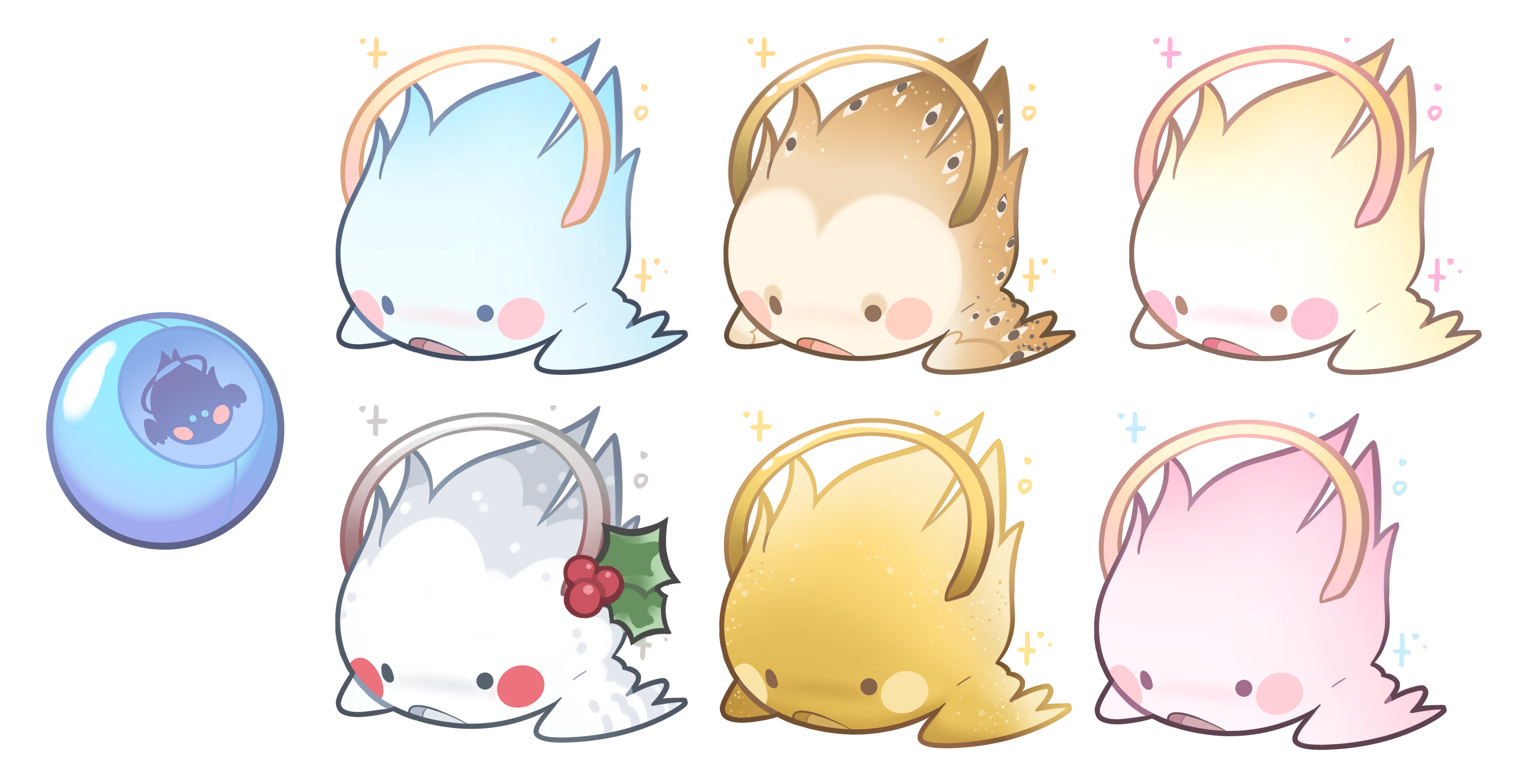 “This feathery, docile creature is a creation of the cappari, and is a popular pet for cappari children due to its extremely tolerant nature.”

This is a seasonal familiar that will make an appearance during chumbus and halcidays.

Obtain in december via…

As a bonus for december, all supporter boxes and $10+ tiers on the supporter ko-fi will come with a fliff capsule.

If you're looking for a gift for a ranebo-playing friend, The supporter boxes make a nice gift box with this bonus inside! Merry chumbus and may your rolls be blessed!

Unlike last year, Chumbus 2021 is a much smaller affair. Everyone's rather busy during this season, staff included, so the event has been heavily downsized!
Chumbus will run from now until December 11th!
On the 12th, the shop will be closed, the raffle rolled and the mods will go on a hiatus for the rest of december!

Click here to check out the Gift giving prompt!
This prompt will not award RC but instead will give you a raffle ticket, a goodie bag with fun items, and the chumbus badge!

The raffle tickets given by the prompt will give you a chance to win this Yule Log Sugarnix by Jarre!
You may only submit 3 prompt entries!
Anyone found with more than 3 submissions will have their additional raffle tickets and prizes revoked. 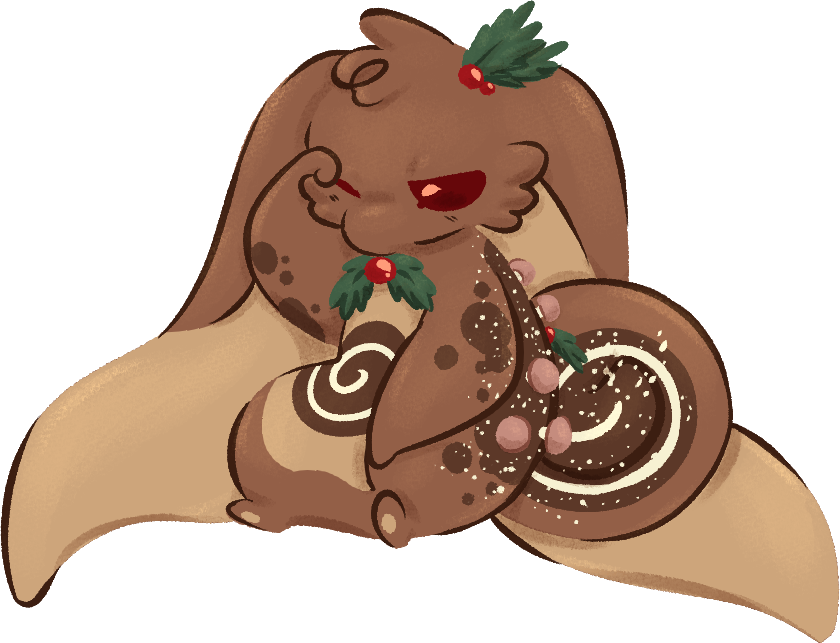 Heya everyone we've got some updates for our december plans!
As I mentioned previously, chumbus is not going to be a larger event like in previous years. This year it will be held as a one week seasonal shop with a single prompt. Like previous seasonal shops, the Chumbus shop will use RC instead of EC. The shop will contain all of the classic Chumbus items from last year!

The reason we do this is because everyone is rather busy during the holiday season, mods included! So in addition to a downsized chumbus, we're also going to be taking a 3 week hiatus at the end of the month. During this hiatus, all claims onsite will be turned off, meaning you cannot submit prompts, art, Myos, or design updates! Our discord help channel will still be open, but we will not be answering questions as often as we normally would be!

If you have any questions about Chumbus or the Hiatus, please send them in the #help channel or leave a comment on this news post!

On a more minor note, with the end of auter, Maple Snort has left the familiar shop! He will be returning again next september! Make sure to grab yourself a whoo before it leaves after December!

Hope y'all had fun for hattowen this year! Now that the event is over, I have a few reminders and updates!

- The hattowen shop will be closing on Thursday November 4th ~11:59 pm. Spend your EC before the shop closes, as all EC remaining onsite will be wiped and deleted on the 5th

- If you completed 2 hattowen prompts (even if its just 2x mothmin prompts) you are eligable to claim the hattowen badge! If you never claimed it during the event, submit a general claim linking two of your hattowen prompts and say you're claiming the badge!

- Y'all may have some leftover Mothmin lanterns from hattowen, but these won't rot in your inventory! They can all be resold for 5 RC! They are NOT sellable for EC.

If you have any questions regarding Hattowen or the end of the event, drop a comment or ask in the discord #help chat!

Candy hunt is a site wide scavenger hunt, much like the one that occurred during Eggster! These candy hunts will last 24 hrs and will take place on the dates seen on the Hattowen calender. To participate, all you need to do is look around onsite for Treat bags! They can be hidden on any page, EXCEPT for member profiles, Masterlist entries, or things like submissions. This means places like the Encyclopedia, Shops, prompts, etc are all valid hiding spots!

Once you find a treat bag, click on it and it will be put in your inventory where you can open it up for a reward! These treat bags are unlimited and ARE NOT first come first serve. We will ask that during the hunts, please do not tell others in public channels where the treat bags are! You are absolutely free to Dm other members to discuss, give hints, or even just share locations privately if thats your thing.

Most things onsite, including these candy hunts, are done completely manually. All bags are hidden and removed by hand. This means after the hunt ends, the candy bags may stay onsite for a period of time. Additionally, Candy hunts will NOT have a set start time. Announcements will be made onsite and on discord when they begin.

Thank you all for participating in the hallogrove 2021 raffle!
We had 50 whole entries this year, but only five winners...

Thank y'all so much for entering!

Additionally, I would like to make a small announcement for any Non-discord users who missed it!
The Candy hunt that was supposed to happen on tuesday was moved to Thursday! So look out for that announcement tomorrow!

Hattowen is coming to a close in just 5 days, so get your final prompts in and grab those items!
EC->TC conversions have also been added to the hattowen shop