This page explains the do's, don'ts, and design requirements of submitted Ranebopets MYO designs. This refers to both newly submitted designs as well as redesigns.

Design Minimums
Your design, whether grown or a hatchling, must have at least 2 colors and some markings. This attempts to prevent users from owning overly basic designs in a game that requires characters to be identifiably different from one another. 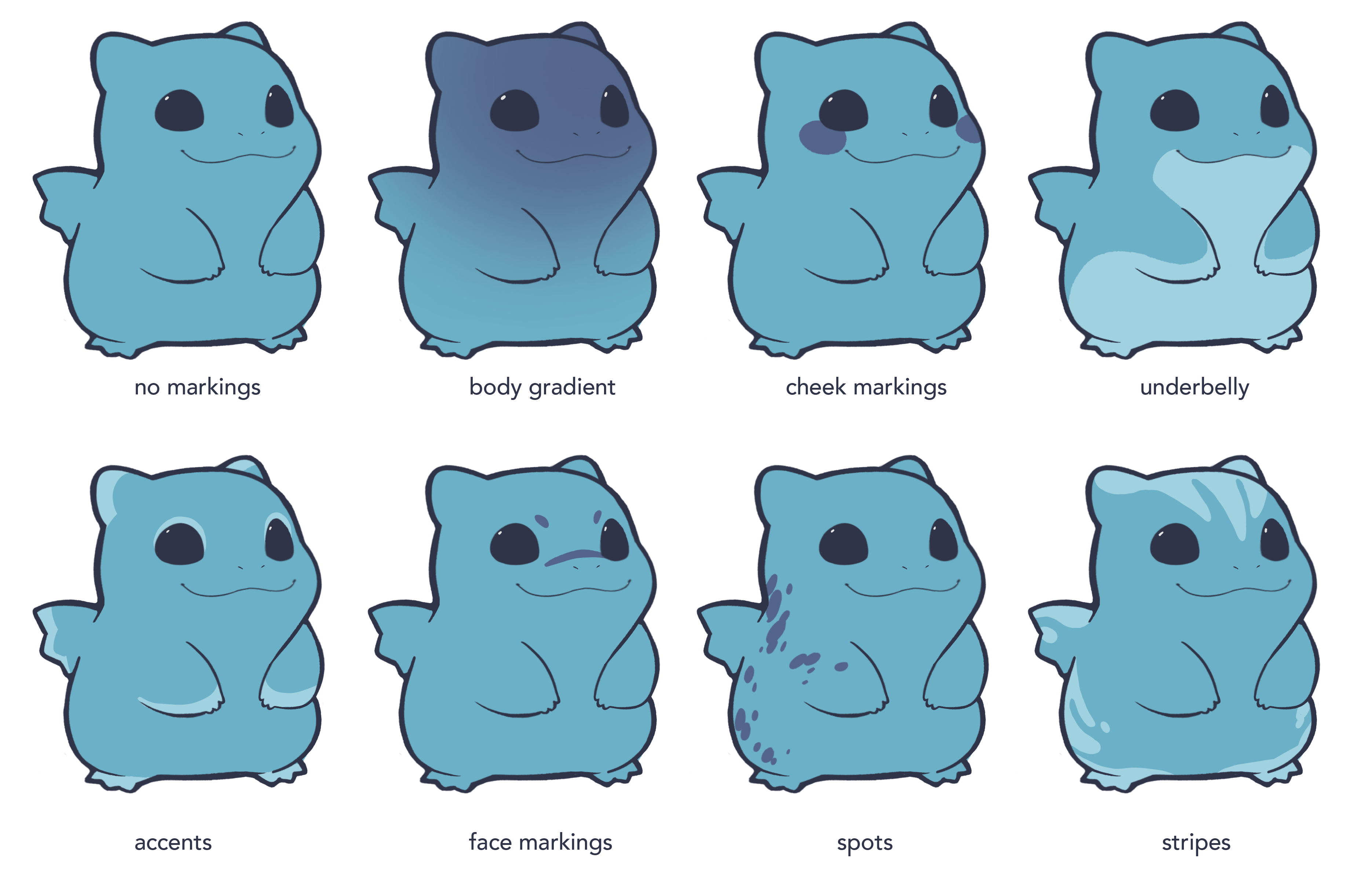 These designs would be accepted, as they each have 2-3 markings!

Giving your existing character a Ranebopets form
You are allowed to "port" the design of a character you own to a Ranebopet MYO, (i.e. make a Ranebopet form or version of your character) so long as you follow these rules...
(please see the below sections for info on copyrighted characters)

--The designs cannot be separated unless your Ranebopet is redesigned to be identifiably different
--You own the intellectual property of the design you are porting and have a Ranebopets MYO slot/ticket to do so
--The design is credited to the designer of the original character on any online profiles (i.e. Ranebopets ML and Toyhou.se)
--Must follow the original designer's rules regarding MYO ports. Check the designer's TOS or ask them -  if the character's designer states it's not allowed, don't do it.
--If a designer approaches us that their TOS has been reasonably breached by a Ranebopets design including but not limited to the above ways, and we agree with their case, we may require you to change the design of your Ranebopet to be a different design.

PROHIBITED THEMES
Designs representing prohibited themes are judged on a case-by-case basis at the discretion of the moderator team. You can report them to us at any time. ANY art or designs, or their accessories posted to ranebopets.com or the Ranebopets discord server or deviantArt group, may NOT in any way ......

- Represent explicit adult sexual themes or fetishes ( ie. erotica such as bondage, lingerie)
- Include words related to adult sexual themes & certain violent or touchy topics (ie. a t-shirt with specific phrases)
- Include or allude to explicit drug and alcohol references (marijuana leaf, XXX-marked bottle accessory). However, a design generally themed around the design/colors of a specific drink, i.e. a cocktail without other references to alcohol are generally fine.
- Represent or include symbols indicative of or related to hate speech or ideology (swastika markings or tattoos, words or numbers linked to hate groups)
- Inclusive of words, accessories, or named themes that we determine to be culturally appropriative or derogatory, such as "wendigo", "Indian headdress", "gypsy", etc.
USE OF COPYRIGHTED CHARACTERS
Your design cannot be based wholly on an existing copyrighted character from existing media. (film, games, comics, etc.)
Your design can be "inspired by" existing copyrighted characters, but cannot be a 1:1 port of their markings, colors, likeness, etc. It must be different enough to be considered an original design. This is determined at the discretion of the moderators. In your design submission, please mention the character source & IP your design is inspired by so we can vet it.

IF WE DETERMINE YOUR CHARACTER is still visually similar enough to its inspired-by character, then we may let you know that you cannot publicly include the name of the copyrighted character it was inspired by, or include the name of the intellectual property the source is from, in conjunction with your design, such as on their Ranebopets profile, TH, your public art submissions of the character if it is represented as a Ranebopets species, etc. All individual Ranebopets share part of Ranebopets' intellectual property and it is within our best interests to ensure our property does not infringe on the rights of others. This is treated on a case-by-case basis and is up to the moderators.

If your character is visually different enough then you may include the source name in its profiles (so long as the name/word is not exclusively copyrighted) but do NOT include the name of the source media i.e. the movie, show, company that it is from anywhere on its profile.